“Vertical Blind” was originally published by Every Day Fiction.

When police detectives come knocking at his door, the narrator of “Vertical Blind” finds out a shouting match he heard the previous night coming from a nearby alley had been the sound of a woman screaming for her life and not the usual everyday drunks he is used to. The fight he heard that night had been a fight to the death.

Read an Excerpt from “Vertical Blind”: 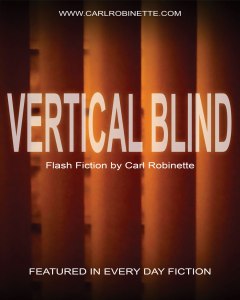 ang-bang-bang, pounding. Snapped awake. Dawn light slanted into the room. Someone knocking on my door. Weird. Nobody knocked on doors anymore without a call or text first. I opened up. Two men stood there flashing LAPD badges.

They wanted to know if I’d heard or seen anything suspicious the night before.

“How do you mean?” The older one asked.

“People shouting in the alley back there,” I said.

“You said a couple?”

“What makes you say they were drunk?”

“Just assuming. The bar, you know?”

“This didn’t raise concern for you?”

“No. I mean, it’s a pretty regular thing around here.”