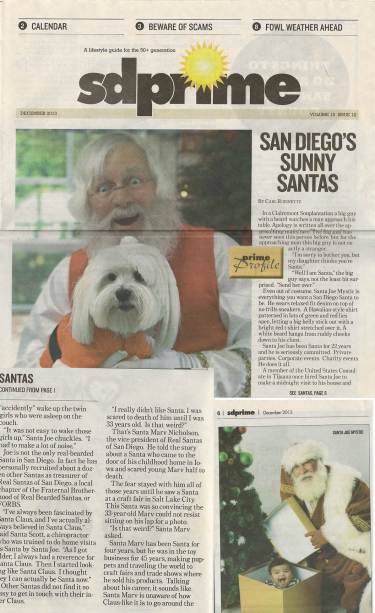 In a Clairemont Souplantation a big guy with a beard watches a man approach his table. Apology is written all over the approaching man’s face. The big guy has never seen this person before, but for the approaching man this big guy is not exactly a stranger.

“I’m sorry to bother you, but my daughter thinks you’re Santa.”

“Well I am Santa,” the big guy says, not the least bit surprised.  “Send her over.”

Even out of costume, Santa Joe Mystic is everything you want a San Diego Santa to be.  He wears relaxed fit denim on top of no-frills sneakers.  A Hawaiian-style shirt patterned in lots of green and red lies open, letting a big belly stick out with a bright red t-shirt stretched over it. A white beard hangs from ruddy cheeks down to his chest.

Santa Joe has been Santa for 22 years and he is seriously committed.  Private parties.  Corporate events.  Charity events.  He does it all.

A member of the United States Consulate in Tijuana once hired Santa Joe to make a midnight visit to a his house and “accidently” wake up the twin girls who were asleep on the couch.

“It was not easy to wake those girls up,” Santa Joe chuckles.  “I had to make a lot of noise.”

Joe is not the only real-bearded Santa in San Diego.  In fact he has personally recruited about a dozen other Santas as treasurer of Real Santas of San Diego, a local chapter of the Fraternal Brotherhood of Real Bearded Santas, or FORBS.

“I’ve always been fascinated by Santa Claus, and I’ve actually always believed in Santa Claus,” said Santa Scott, a Chiropractor who was trained to do home visits as Santa by Santa Joe.  “As I got older, I always had a reverence for Santa Claus.  Then I started looking like Santa Claus.  I thought hey I can actually be Santa now.”

Other Santas did not find it so easy to get in touch with their inner Claus.

“I really didn’t like Santa. I was scared to death of him until I was 33 years old.  Is that weird?”

That’s Santa Marv Nicholson, the vice president of Real Santas of San Diego.  He told the story about a Santa who came to the door of his childhood home in Iowa and scared young Marv half to death.

The fear stayed with him all of those years until he saw a Santa at a craft fair in Salt Lake City.  This Santa was so convincing the 33-year-old Marv could not resist sitting on his lap for a photo.

“Is that weird?” Santa Marv asked.

Santa Marv has been Santa for four years, but he was in the toy business for 45 years, making puppets and traveling the world to craft fairs and trade shows where he sold his products.  Talking about his career, it sounds like Santa Marv is unaware of how Claus-like it is to go around the globe with toys for almost half a century.

That’s how it is for most of the Santas.  With all of their stories there it is some part of them that has always been Santa, some element of predestination.

Take Santa Jim Larson who discovered the Santa in himslef late in life too.

“I’ve always loved the Christmas season, but I never really concentrated on Santa,” Santa Jim says with a deep and slow Texas drawl.  “I grew up in a small country town that was a little more austere.  It was more about family and being together with loved ones.”

“When I grew the beard I started looking at pictures of Santa and thought, hey that guy looks like me.  And Norman Rockwell never laid eyes on me.”

His wife, Mrs. Susan Claus, started joining him for events a few years ago.  Santa Jim affectionately refers to Susan Claus as “The Boss”.

“If you can picture a 75-year-old who just did a back flip, here she comes,” that’s how Jim introduced Susan over the phone.

“The first couple of years it didn’t seem like people needed Mrs. Claus,” Susan Claus said.  If she is also from Texas you cannot hear it in her voice.  “But this year it seems that people do need a Mrs. Claus.  There have been many requests, and that makes Mrs. Claus feel a lot more important.”

“A lot of Children are in awe of Santa, but they feel very comfortable with Mrs. Claus,” she said.  “She represents a mother or grandmother figure.  If they are nervous, they go to her and they can see Santa up-close while they hold Mrs. Claus’ hand.”

They have been married 25 years.

“She’s excellent at making cookies,” he said about his Mrs. Claus.  “And peppermint sticks.  But I like the cookies best.  The peppermint gets stuck in the fur on my sleeves.”

Santa Joe has a Mrs. Claus too, Cindy Claus.  They have been married 21 years.

“He needed a Mrs. Claus and he had the outfit so I started wearing it,” Cindy Claus said sitting with him at their dining table.  When she started out as Mrs. Claus she was working with other Santas and still does, but working with her own Mr. Claus is what she prefers.  “It’s wonderful when you get to work with a good Santa.  He is a really good Santa.”

“Of course she’s not biased at all,” Santa Joe said.

But there is more to being Santa than just having fun.  A lot of Santas take up the Claus because they need the money.  Santa Joe made $16,000 last December and this year he has been booked-up since June, and is likely to hit as many as ten venues in a day.

For the other 10 or 11 months out of the year, Joe is a magician and performs for children’s parties and even donates his time doing magic at convalescent homes.  But he really does depend on that December cash spur.

This year the San Diego FORBS chapter raised $2,500 that they will spend on gifts to be delivered by a handful of Santas to needy families that were selected through the San Diego Rescue Mission.  They also do work with Father Joe’s Villages, which helps house homeless people in San Diego.

“When I first show up somewhere I’m decked out. Even the adults’ jaws drop,” Santa Joe said, and there’s real pride when he shows off photos of himself in costume, a costume for which he shelled out about $1,500.

Some adults still believe in Santa in their own way, said Joe.

“What they’re believing in is the goodness, the virtue and the giving.  Let’s face it.  People are just kinder to each other during the Christmas season.”

Besides the beard, the clothes and general jolly attitude toward their community, they all have something else in common—a deep love of the holiday season and they all see themselves as Santa 12 months out of the year.

“I’d like to see Christmas go from October until after Easter,” Santa Jim said, the Texan accent still in full force.  “But nobody has asked me to draft a bill on that yet.  We all love the season and we all love the children so much.  We all want to be thee Santa.  We can be tall or short or even a little bit skinny, but as long as you put that Christmas twinkle in a child’s eye, that’s all that matters.” 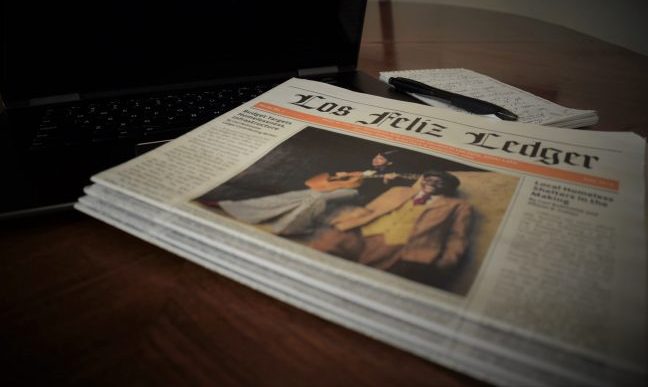 “Baby Idiots,” Written, performed, edited and scored by Carl Robinette. Reading from LitCrawlLA 2019. The Baby Idiots series started as a simple story with a simple question in mind. How do you write a story about an irredeemable jerk you just have to love, even when that jerk is bashing someone’s brains in?