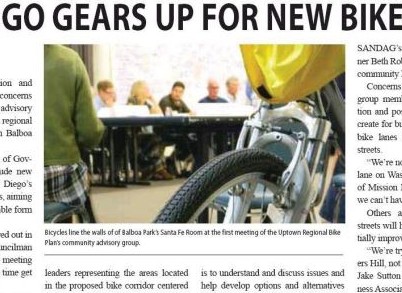 Safety, community connection and fiscal impact were the top concerns raised at the first community advisory group meeting for the Uptown regional bike plan Wednesday night in Balboa Park’s Santa Fe Room.The San Diego Association of Governments bike plan will include new bike routes in some of San Diego’s most densely populated regions, aiming to make the bicycle a more viable form of transportation in the city.

The community advisory group enlists over 40 community and business leaders representing the areas located in the proposed bike corridor centered around the Uptown area.

“The purpose of the advisory group is to understand and discuss issues and help develop options and alternatives to be shared with the larger community for feedback and refinement,” said SANDAG’s active transportation planner Beth Robrahn in an August email to community leaders.

Concerns were raised by advisory group members about parking reduction and possible problems this might create for businesses as a result of new bike lanes on already crowded city streets.

“We’re not opposed to having a bike lane on Washington,” said Joe Naskar, of Mission Hills Town Council. “But we can’t have businesses harmed.”

Others argued that bike friendly streets will help calm traffic and potentially improve business in those areas.

“We’re trying to get people to Bankers Hill, not through Bankers Hill” said Jake Sutton of the Bankers Hill Business Association.

A similar project recently implemented in Long Beach saw a reduction of through traffic with no negative impact on business, according to Chris Kluth, SANDAG’s senior active transportation planner.

Funding for the project will be allocated by the association of governments from the TransNet half-cent sales tax of 1988 as part the San Diego regional comprehensive plan and the regional transportation plan.

A formal budget for the project will not be established until the planning and design phase is complete and funds have been allocated to the other projects within the comprehensive plan.

“These are tax payer’s dollars,” said Coleen Clementson, SANDAG’s principal planner, “So whatever we come up with, we gotta make sure we’re being responsible with taxpayer dollars.”

The next phase of the project will be producing an analysis of the existing conditions of San Diego streets which will help determine design and implementation.

“That’s when it gets really juicy,” Robrahn told the group. “We’re going to have to get really creative about how we work together.”

No date has been set for the next advisory group meeting but it is targeted for the end of January.