“We must content ourselves with the mystery, the absurdity, the contradictions, the hostility, but also the generosity that our environment offers us. It’s not much, but it’s always better than the deadly, defeatist certainty of the paranoid.”
— Philip K. Dick

The bystander is an often overlooked archetype in crime fiction — the faceless driver who gets run off the road during a highspeed chase, the nameless security guard who gets shot by the loose-cannon bank robber, the cook in the kitchen who shouts at the shortcut-taking hero and all the other functionaries who wander in and out of the main plot. Even in movies where we hear and see more of these characters, we rarely learn their stories or how they are affected by their experience.

The exact opposite is true in Carl Robinette’s short story, “Bystander Boondoggle,” which was recently published in Mystery Weekly Magazine.

The narrator of this story is a loner who only wants to spend his Thanksgiving sitting in his shack being angry at the world. But his holiday plans are blown to hell when he becomes embroiled as a bystander in some kind of deadly conspiracy.

With more questions than answers, the protagonist of this mystery couldn’t care less who done it – all he wants is to win the heart of a woman he just met.

Paranoia, intrigue, murder and romance are the lifeblood of this story. Read it in full in ebook or print Click Here.

Read an Excerpt from “Bystander Boondoggle”

Thanksgiving. San Fernando Valley. Eighty-nine degrees. I was reclining in my little drive-up kiosk that I lease. The place used to be a drive-through coffee shack. Now it was my office shack, and also temporarily my apartment. A guy walked over from the bus stop at the corner and asked if I by any chance sold cigarettes. I said no, I don’t sell anything. He tried ordering a coffee. I told him again—I don’t sell anything. He wanted to know what I meant. I told him I wanted to know what he meant asking me what I meant. He asked me if I realized the coffee mug painted on the side of the shack made it look like a coffee place. I told him to cram an egg in it and scram. The guy stank-eyed me and walked across the lot to Judy’s Donuts. 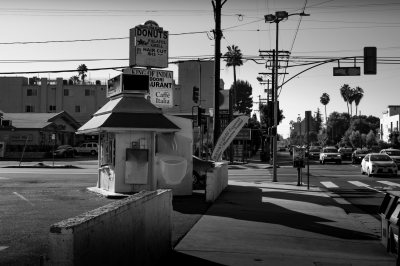 Thanksgiving. An honest holiday. No presents. No fireworks. No used-car-lot inflatable decorations on front lawns. Just good stuff. Overindulgence. Wine. Family fighting. Champagne. The sting of old regrets bubbling out and making me sentimental. I wanted to be grumpy about everything. Then my mood brightened when a big strong woman in firefighter’s clothing walked into Judy’s shop.

Judy is a compulsive floor polisher. I once told him he was going to kill someone or get sued, big yellow warning cone or not. His doughnut shop is slip city. I know the man as Judy but he also has an entire different name. His actual name. I guess the shop was called Judy’s when he signed the lease and the man just rolled with it.

I basked in the thick aroma of fried dough, coffee and lemon-fresh floors. The tough looking woman I had followed in was picking out a dozen doughnuts when one of her boots slipped on the slick linoleum.

I swooped an arm around her back. She weighed a ton. The weight felt good. My biceps whinnied like proud stallions. Her caramel eyes flared back at me.

She said, “What are you doing?”

She told me, yeah well, she wasn’t in need of any catching.

“I’m pretty sure you were falling,” I told her.

“Hmm. Maybe so.” I shrugged. “Points for good intentions?”

“Yeah. Ok, weirdo,” She said and asked, what were my intentions exactly?

“Why don’t you marry me and find out?” I told her.

The hot thrill of the old dance had begun.