Falling Into a Beat – Environmental Reporting In Beverly Hills

I’ve fallen into a bit of an environmental beat lately. In the last few weeks I’ve covered a few stories for the Beverly Hills Courier that have to do with air quality in one way or another. From a climate action plan, to an urban forest plan, the city is making some pretty serious gestures toward cleaning up its air and becoming more sustainable.

This isn’t officially my beat with the paper, but the way leads have gone, I’ve been writing about these kinds of topics lately.

Climate change has been identified as a “critical threat” to trees across Beverly Hills, according to a proposed draft of an Urban Forest Management Plan. The draft was presented to the Public Works and Planning commissions this week and lays out long-term goals for sustainably expanding and maintaining the urban forest in Beverly Hills. 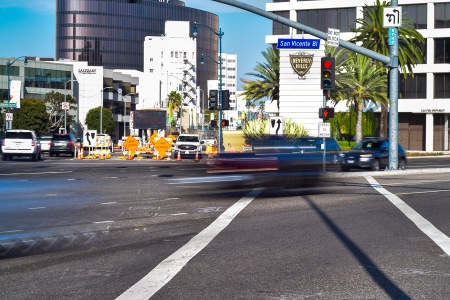 A proposed new bicycle lane for southbound San Vicente Boulevard in Beverly Hills received unanimous support from the Traffic and Parking Commission at its Sept. 2 meeting. If approved by City Council, the lane would run from Clifton Way to Wilshire Boulevard to complement the bike lane already on the northbound side of San Vicente.

At a meeting this past March, members of the Beverly Hills City Council reflected on a simpler time in America. They recalled childhood memories of playing in the middle of neighborhood streets with little fear of being hit by a speeding vehicle. The reminiscing took place to show consensus support of a Neighborhood Slow Streets Program that has since been put into effect.

A Climate Action and Adaptation Plan is in the works for Beverly Hills in an effort by the city to achieve its long-standing goal of becoming totally carbon neutral by 2045. Work on the plan was delayed by the COVID-19 pandemic, but is now back on track. A community advisory committee is being formed to oversee the creation of the climate plan and ten city commissioners have been appointed to the committee so far.